In writing down the Anglo-Saxon language, Christian monks adapted the Latin alphabet to English, adding extra letters for all the sounds. The arrival of the Normans and their French scribes with their spelling conventions introduced many changes in vocabulary, pronunciation, and spelling. 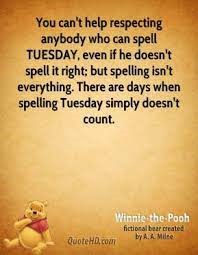 The French scribes opted to keep the spelling the same for the roots of the words. As David Crystal explains in his book SPELL IT OUT: The Singular Story of English, “As more words came into the language, we can see this principle extended to all such words, whatever the suffix: sole became solitude, obscene became obscenity, and cave became cavity.  By the 16th century, the new principle was well established. Electric? Electricity. Ferocious? Ferocity. A whole new class of exceptions had arrived.”

Suffixes completely altered the look of English, Crystal says. Although there are only about fifty of them in everyday English, they appear in around half the words in the language. In technical and scientific terms, the proportion is even greater.

“The French scribes also encountered unfamiliar letters in the shape of ash (ae: written on top of one another), thorn, eth, and wynn, and the ‘g’ was being written in a curious way (3). Words like aegis and Aesop kept the two constituent letters, but separated ash into two letters (ae) now apart. Most people now write such things a ‘under the aegis of the Football Association’ and Aesop’s Fables.” 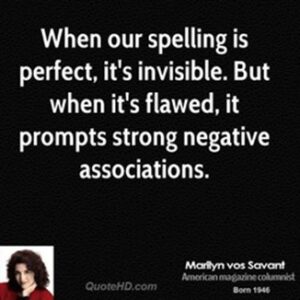 French and English had several sounds in common, and the spellings were the same. Crystal reasoned that if the scribes found a Anglo-Saxon spelling practice unpalatable, it became a simple matter to replace it with a corresponding French one. The choice between an ‘s’ and ’c’ attracted a lot of attention. Some French words continued to be spelled in an Anglo-Saxon way: French service, for example, appeared as serfise, servis, and others. But today, all are spelled with the French preference: ce (service, since, dance, truce, etc.).

Crystal explained that once a new spelling arrived, it could be exploited, and a good example is the way – ce and – se were then used to distinguish awkward word pairs. “These were cases where the same basic word was used both as a noun and a verb by changing just a single sound. Advice was now able to contrast with advise, and device with devise. In the 17th century, some spelling authorities decided that the distinction was so useful that it should be extended to two other verb/noun pairs: practise and practice, license and licence. They ignored the fact that there was no difference in pronunciation in these cases, and so another complication for modern learners came about.” Of course, in the U.S., we use the same word practice as both a noun and a verb, though why the other examples aren’t affected is beyond me. 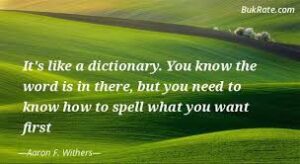 Ritch, rytche, rych and riche became the word it is today: rich. Crystal says you see the influence even today. “It would have been perfectly possible to spell the name of the small, trendy shops and hotels that began to appear in the 1950s as bouteeks, but the connotations of the spelling boutiques evidently had greater appeal. Several French words ending in que have the same appeal: critique, plaque, and baroque.”

These are all examples of sounds staying the same, but the spellings changed. Crystal explains that a sound can turn up in a word in three positions: at the beginning, in the middle or at the end. Some sounds appear in all of these. “Quite often, in the history of a language, a sound that is usually heard in one position begins to be used in another. When that happens, there are immediate implications for the spelling. Can the spelling transfer along with the sound?

Ever wonder about those people who spend $2 apiece on those little bottles of Evian water ? Try spelling Evian backward. -– Georg Carlin

That question had to be faced in the early Middle Ages as a result of the impact of French on English with the consonant d3 that we hear at the end of words like hedge. In Old English, this sound was only used after a vowel. But in the Middle English period, as Crystal says, words began to arrive from French beginning with this sound, such as gentle, gem, joy, and jewel. How were they to be spelled?

The letters ‘g’ and ‘y’ were already used for other sounds. The letter ‘j’ was beginning to appear as a separate letter shape in English. Crystal explains that ‘j’ was originally “a variant introduced to help the reader when there was a sequence of two or more ‘i’ letters, as in Roman numerals. They added a tail to the final ‘i’ and wrote them ij, iij, and viij. It was never thought of as a letter in its own right; it was simply a ‘long i.’ But several European languages exploited it as a way of showing a consonant sound. Eventually the ‘j’ form dominated other spellings of the sound, so rather than ioie, goye, yoye or joye, we finally have joy, as well as jest, jig, jump and jazz.”

In Old English the sounds ‘f’ and ‘v’ both existed, but they weren’t used to distinguish words. The intonation at the end of a word told you how the word was being used. 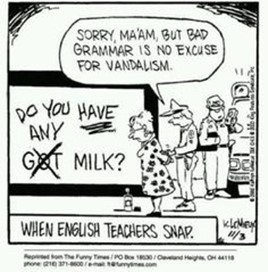 The French Influence on ‘f’ and ‘v’

This changed in the early Middle English period. Crystal says the French scribes heard the two sounds and spelled them differently: an ‘f’ for the voiceless sound, and a ‘u’ (later a ‘v’) for the voiced sound. He says, “It was a familiar contrast to them: word pairs in French were already differentiated by ‘f’ and ‘v’ – in today’s language, there is fin (end) and vin (wine). They were also used to seeing words spelled with a ‘v’ in Latin.”

Crystal says the process was hastened by the arrival of new words from French. Some contrasted with a previously existing English word, such as view (French) and few (Old English) or veal (French) and feel (Old English). In other cases, both words were French imports, such as save and safe. And once the pattern was established, ‘v’ and ‘f’ became a regular feature of the sound system.

The same situation applied to the difference between ’s’ and ‘z.’ Sometimes two French words would go in different directions, as in prize and price, seize and cease. “Uncertainly continued,” Crystal says, “until the 16th century when gaze, amaze and razor were spelled both ways, then ‘z’ prevailed. Tease, bruise and surprise were spelled both ways until as late as the 19th century, when ‘s’ prevailed. Sometimes they had to distinguish between three words: raze and race (from French) alongside raise (from Scandinavian).”

Don’t use a five dollar word when a fifty cent word will do. –– Mark Twain

If anything came to popularize the letter ‘z’ in modern times, Crystal says, it is the -ize ending frequently used to form new verbs. Classical scholars preferred this spelling, especially in the 16th century, as they felt it more closely  reflected the way the words were spelled in Greek and Latin. 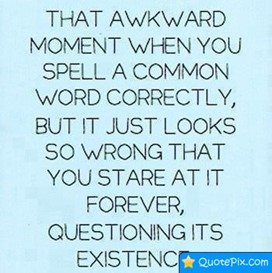 So where did the -ise alternate come from? The trend to spell verbs like baptize with an ‘s’ (spelled in Middle English with both an ‘s’ and a ‘z’) began when verbs came into English with increasing frequency from French, where the suffix was – iser. It was argued that it should be spelled to reflect the source. Crystal says, “Some felt it important to maintain a spelling link between reference words, such as analyse and analyst.” This usage grew during the 19th century.

From French or From Latin?

The problem, of course, is that it is often unclear whether a verb has come into English from French (so use ‘s’ ) or from Latin (so use ‘z’). Confusion reigned until 19th century printers tried to sort it out and imposed a uniform rule for all such verbs where an alternative existed. There are also fewer exceptions if you use the – ise rule. Crystal says, ”Several verbs can only appear as -ise, and you have to remember what they are:

Of course, it’s not a complete list because there are derivatives (enfranchise) and new usages (merchandise) you have to take into account as time passes.

And Those ‘th Sounds

The same change that affected ‘f/v’ and ‘s/z’ also applied to the two th pronunciations of Old English. Today these sounds can differentiate words, as heard in modern thigh vs. thy or wreath vs. wreathe. Crystal says, “The spelling stayed the same for both sounds, probably because the French didn’t have the th sound, and the small subset of words are considered exceptions: the, this, that, these, those, there, their, then, than, thou, thee, thy, thine, they, them, though, and with.”

But, as Crystal says, these exceptions weren’t the only ones. 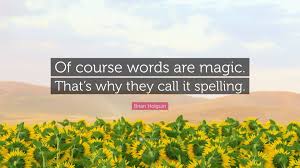 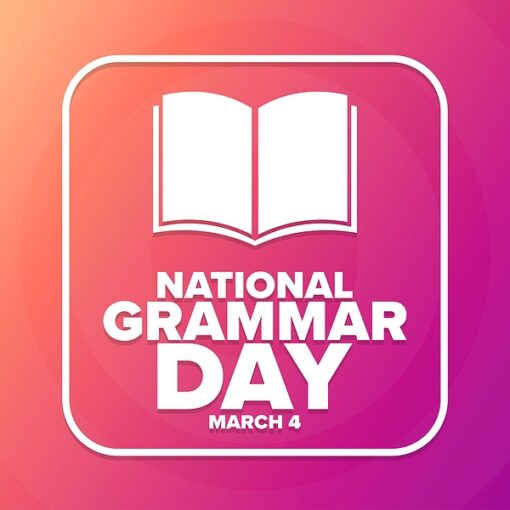 National Grammar Day was first celebrated in 2008 by founder Martha Brockenbrough to promote awareness and understanding of proper grammar. The day’s […] 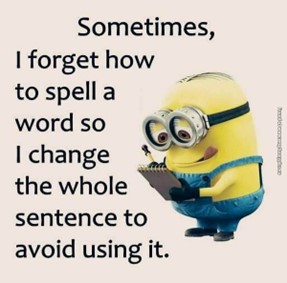 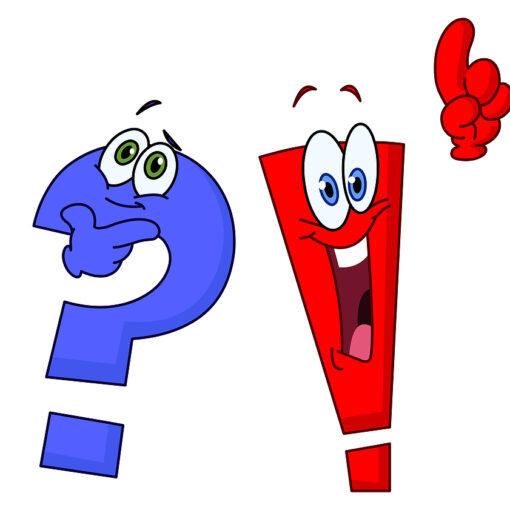 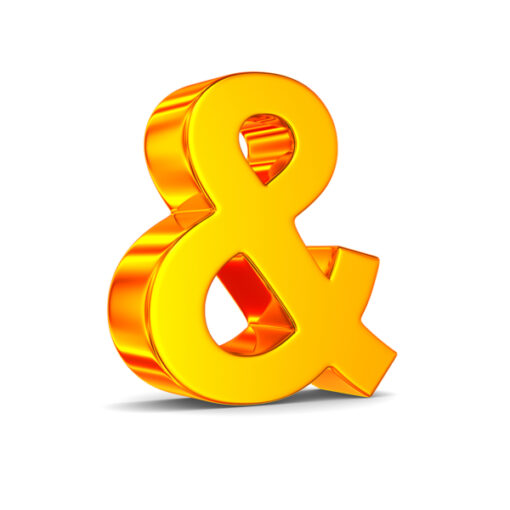