Christian monks adapted the Latin alphabet to English in the 6th century. When the Normans arrived with their French influence,. they added to the pronunciation changes already happening. Suffixes appeared, sounds changed places, all leading to changes in spelling practices, exceptions and analogies. 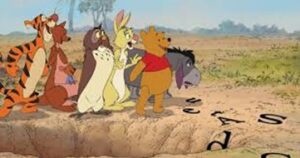 Christopher Robin jumped onto the tree stump and made an announcement. “Friends, the Spelling Bee has been cancelled because spelling is difficult enough at the best of times and impossible in the rain.” — David Benedictus, Return to the Hundred Acre Wood

What seems to have happened is that people started to say these words towards the front of, and higher in the mouth. Dame would have begun to sound more like a long version of dam — much as many Americans say ma’am today.

“Something kept the pronunciation changing and by Shakespeare’s time (the late 1500s), words like dame were being pronounced with a sound that today we’d identify with a long version of the vowel in them. Later still, it moved even higher in the mouth and became a dipththong, ending up with the sound we have today.”

Crystal says throughout this period of change, the spelling stayed the same. The irony is that now dame reflects the sound this word had around the year 1400!

Language is more fashion that science, and matters of usage, spelling and pronunciation tend to wander around like hemlines. -– Bill Bryson

Crystal says that once we know about The Great Vowel Shift, a number of apparent “illogicalities” in spelling can be explained. “Why do we say child with a long vowel and children with a short vowel when both words are spelled with the same letter ‘i’? Because only long vowels were affected in the Great Vowel Shift; the short vowels stayed the same. The principle is the same with entice but police, excite but petite, decline but routine, using the one letter “i’ for two very different sounds. In each case, the first word in these pairs was in the language before the 15th century; the second arrived later. So the first set of words had their pronunciation changed and the second group didn’t.”

If all long vowels stayed long, and all short vowels stayed short, Crystal explains, words would be a lot easier to spell. But that’s not how speech works. He gives present-day examples where usage varies, such as ate (/ate/, /et/), says (/says/, /sez/), and privacy (/pryvacy/, /privvacy/). All can be heard with long and short vowels.

Why do vowels change their length over time? “The reasons,” Crystal says, “have to do with t he way a vowel relates to the other sounds within a word. How many syllables come before it and how many after it? How many consonants come before it and after it? Does it occur in a stressed syllable or not?” Crystal says English “is a language where speakers like to keep the ‘weights’ of their words evenly balanced, and one way of doing that is to vary the length of the vowels.

Simplified spelling is all right, but, like chastity, you can carry it too far– Mark Twain

“The more consonants there are after the vowel, the ‘heavier’ in gets, and we make up for that by making the vowel short: architect (/ar’ca’tek/). On the other hand, a simple consonantvowel sequence or a vowel on its own, is always going to have a long sounds: me, go, do, I.”

He says if a vowel has two or more unstressed syllables following it, the likelihood is that it will be short. “That’s why we have crime (long vowel) and criminal (short), type and typical, divine and divinity.”

By the time printing arrived in the 1470s, the Great Vowel Shift was well underway. Crystal says the problem facing the scribes now was how to choose spellings that best represented speech when sounds were changing so noticeably. And the printers faced it too. 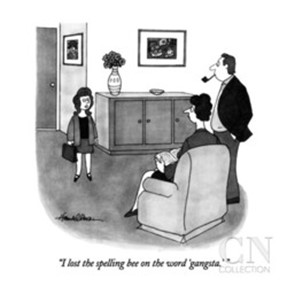 The arrival of printing brought a degree of order to the English language, according to Crystal, especially when compared with the diversity found in scribal manuscripts. “William Caston arrived in English in 1476 with a pile of manuscripts, a press and sets of type. Between then and his death in 1491, he published over a hundred works, including Chaucer’s Canterbury Tales and Aesop’s Fables.“

Crystal says there’s an element of truth in the “order” comment because printers introduced punctuation marks in a more systematic way. But variations still existed in the earliest printed books, and sometimes printers added variants that actually increased spelling irregularity. “Flexible spelling helped when printers were trying to make their pages look good to the eye, with a nicely justified right-hand margin, especially if there were two columns on the page. Adding extra letters, especially an ‘e’ was a simple solution to the problem of line length.”

Caxton and his two helpers learned their trade on the European mainland, Crystal says, in Cologne and Bruges. Their English couldn’t have been very good, and there were no dictionaries yet. There were used to reading manuscripts in Flemish spelling in Bruges. So if a word reminded them of it Flemish counterpart, why not spell it in  the Flemish way.

It took a while for new spellings to catch on. Holy Gost is in the 1659 Book of Common Prayer, but by the end of the 16th century, everyone was using the new way. Hamlet’s dead father, Crystal says, is a ghost, not a gost. And slowly, the ‘h’ spread. 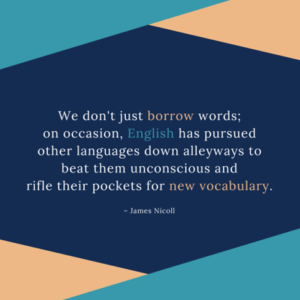 “Where we have ghosts,” Crystal says, “we have ghouls–an Arabic word, spelled goul or goule when it first arrived in English in the 19th century, with the ‘h‘ added later. Gherkin too. Nobody knew how to spell it when it arrived from Dutch in the 16th century. A few loanwords probably reinforced the trend to spell t the /g/ sound, especially if there was a gh in the source language.”

Ghetto came  in from Italian with the ‘h’ already there, Crystal says, as did spaghetti. The feeling seems to  have been that gh was appropriate for foreign words that had a /g/ sound. “In the 16th century, ‘h’ was added to German burger to produce burgher, though Americans never used it. In some instances, ‘h’ helped to make a distinction with an already existing word: “ghee (butter_ wouldn’t be confused with gee, nor dinghy with dingy.”

According to Crystal, it’s common to see a gh ending in British towns, such as Edinburgh, so the pattern was carried across the Atlantic. He relates that in 1758 Sir William Pitt was commemorated in the city of Pittsburgh in Pennsylvania. “However, in 1890, the newly established US Board of Geographic Names adopted a simplifying policy that included dropping the final ‘h from all names ending in -burgh. Most accepted the change, but in Pittsburgh, PA,” There were protests, and in 1922, after twenty years of lobbying, the ‘h’ was restored to its name. 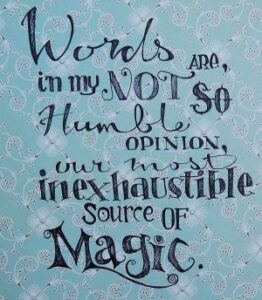 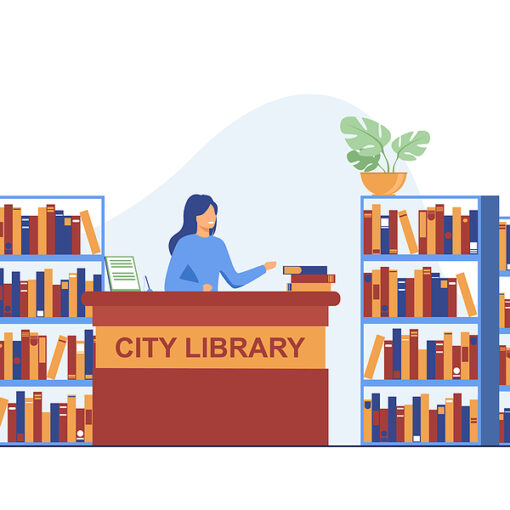